We are at Casa Levi, in Aliano

In 1931, Carlo Levi joined the anti-fascist movement Giustizia e Libertà (Justice and Liberty). Following his first arrest in 1934 for suspected subversive activity, he was arrested again in May 1935. Sentenced to exile, he was initially sent to the village of Grassano and later to Aliano. Released in May 1936 as part of the clemency measures introduced by the regime during the proclamation of Empire, he managed to join the underground anti-fascist network in France. Back in Italy, he joined the Partito d’Azione in 1943 and edited the newspaper of the Tuscan Liberation Committee, La Nazione del Popolo.

The house in which the anti-fascist writer served his exile was turned into a museum in 1998. Today, it represents the heart of a larger memorial complex, which covers the entire town of Aliano and most of the locations immortalised by Levi in his masterpiece Christ Stopped at Eboli. In addition to the house is the Museum of Rural Civilisation, the Art Gallery, and the tomb of Carlo Levi, who chose to be buried in Aliano. Lastly, there is a monument dedicated to him at the entrance to the small village in Lucania. 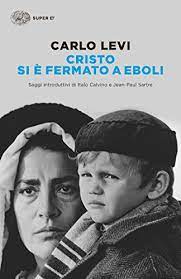